Skip to content
Top Tags
Broker Guide > News & Articles > Biden vs Trump: The US referendum for what America will look in the XXI Century

Biden vs Trump: The US referendum for what America will look in the XXI Century

Just six months before the 2020 presidential election, the United States is living one of the most excruciating times in its modern history. Social unrest, a pandemic crisis, and an economic recession are now filling headlines across the country.

The race seems defined to be between two titans such as the incumbent president Donald J. Trump, and the Democratic Party almost-nominee and former US vice-president Joe Biden.

According to the RCP Poll average, Biden is leading the race with 49.8% of the intention of vote, over 8 points above Trump’s 41.7%. 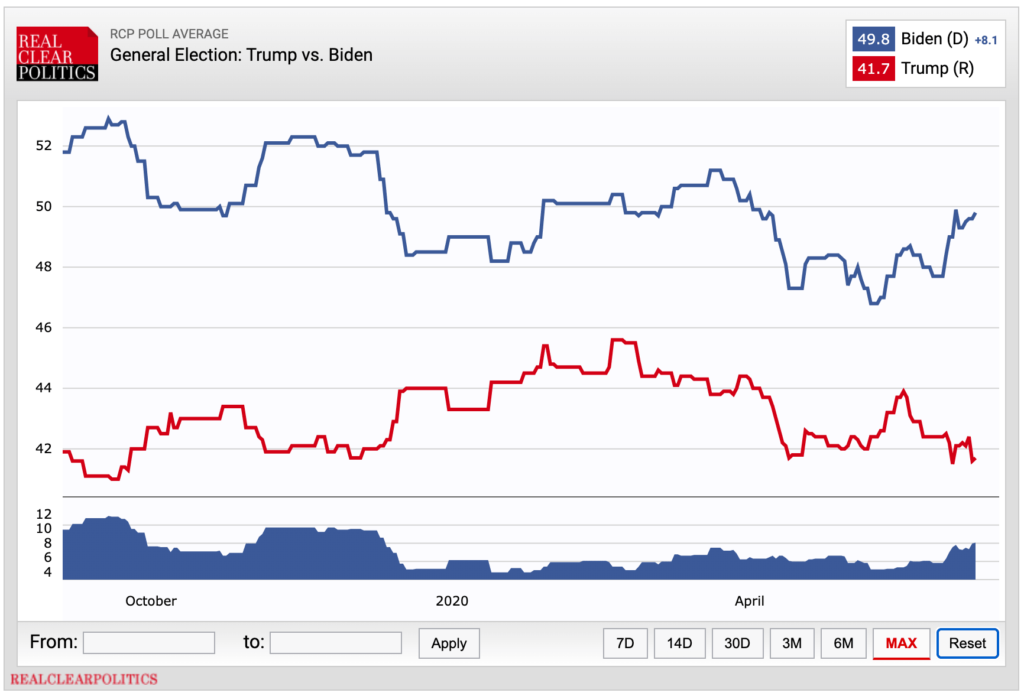 Lee Drutman, a senior fellow in the Political Reform program at New America, highlights that people are not rooting for Joe Biden but against Donald Trump. He thinks that it is essential to understand that Biden’s surge is a “NOT TRUMP” vote.

“Polls show that three-quarters of Americans believe that there is systemic racial injustice in the US, and Trump is clearly on the wrong side of public opinion at a moment in which these issues are super salient,” Drutman said in a politics chat. “That has to hurt his standing.”

Although 72% of Americans think violence is not justified in response to George Floyd’s killing, around 57% believe that policing is biased against African Americans. At the top of it, most people in the US find there is systemic racial inequality in the country.

With the United States being the most affected country in terms of COVID-19 cases and deaths, and a denial coronavirus president now looking for somebody to take the responsibility of the crisis, 54.2% of people disapprove of Trump’s response to the crisis. 42.1% approve of it.

When talking about parties, 83.7% Republicans approve of Trump’s handling, while only 10.7% of Democrats do it. The key is with independents, approval of the response is only 37.1%.

Wall Street enters in the scene

According to reports from CNBC, Trump wants to delist Chinese companies from the US stock market exchange.

The decision would be based on a new bill passed last month by the US Senate that would allow the president to ban Chinese companies from US exchanges or to raise money from US investors.

Professor at Harvard Law School, Jesse Fried warned that the bill would hurt Wall Street, but he doubts it will pass. “I think in terms of protecting American investors, this bill if it becomes law, could backfire,” and hurt both American investors and Wall Street Fried said.

However, Fried thinks that Wall Street would fight back against the bill, giving Trump another enemy to fight.

How Trump’s approval is vs other presidents 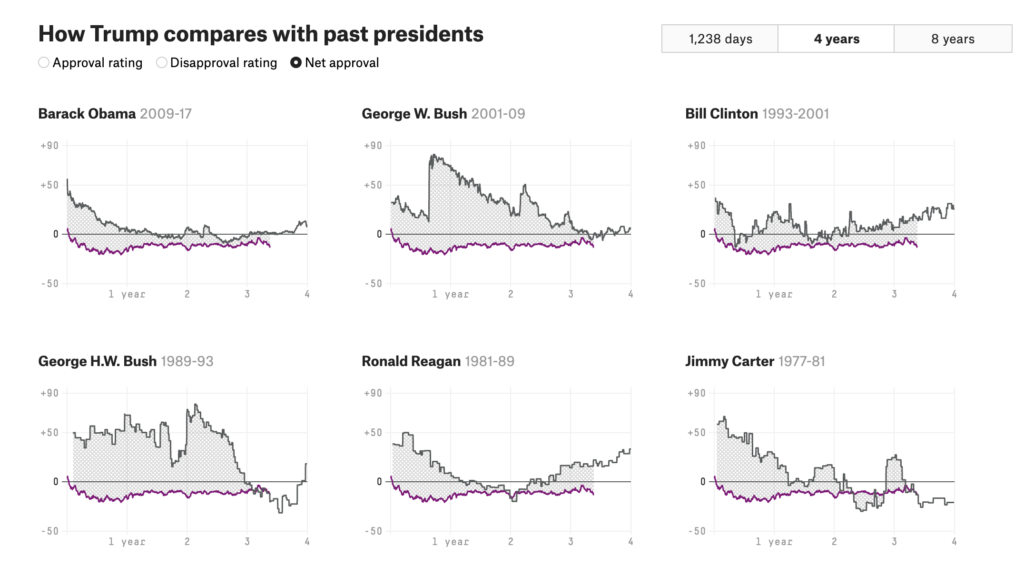 According to FiveThirtyEight, the last three US presidents who won the reelection have positive approval, nothing that Trump can grant for the foreseeable future. The president with the worst approval was George W. Bush, who had -0.6 on day 1.236 of its presidency. Trump’s support is -13.8 on the same day.

The last two presidents who lost reelection were the first George Bush and Jimmy Carter, both with negative numbers.

So, what would Trump do in the next months to change his fate? Well, something that he knows how to do at his best.

Trump will try to spur his base of voters and the far-right positions to try to secure at least 40% of a solid voter base. Also, the White House will push the Federal Reserve and Congress to take more stimulus measures, checks, and free money.

Finally, the question that lies over the election is a possible COVID-19 second wave in the United States. As November is just in the middle of Autumn, it will become a potential concern for politicians and society.

And of course, the Democratic party will try to cash out in any social and health emergency in the United States.

What if Biden wins?

In the case of a Joe Biden victory, the market would take a breath and investors will prepare themselves for a “return to normality.” Steady growth but not too much volatility. The dollar would continue with its downtrend but in a more stable way.

According to JPMorgan analysts, a Biden presidency with a Republican Senate would be the best-case scenario as it would finish “randomly-timed disruptions from foreign/trade policy” while maintaining Trump’s market-friendly economic policies.

On the other hand, a Biden presidency with a Democratic Senate would be the worst-case scenario for markets as the party would like to take advantage of the majority to introduce “new industry regulations alongside corporate and capital gains tax hikes.”

What if Trump wins?

Volatility will be the focus in the case of Trump securing the reelection. Markets love volatility, you know that. However, excessive uncertainty and wild swings can also hurt small investors and independent traders.

The market would expect more rallies in Wall Street but also a weak dollar and higher gold. Again, it would be growth with steroids with all that profitability and risks associated.

Finally, it can signal more political and social unrest in the United States. That could lead to an economic crisis with fundamental disorders that, in the end, it would fuel risk aversion on markets.

If markets were asked at the beginning of the year, experts would bet on four more years of the “Make America Great Again” presidency. But now the odds are different, and the most likely outcome is a Biden victory.

But who knows! Just remember, the worse Trump does, the higher Biden goes in the polls.