Skip to content
Top Tags
Broker Guide > Mauricio's Blog > EUR/USD Sets 1.1240 as the New Floor for the Next Uptrend Leg

EUR/USD Sets 1.1240 as the New Floor for the Next Uptrend Leg

The Euro closed Tuesday positive against the US Dollar but not before fighting back against one of the most critical bear attacks in the last days.

On Tuesday, the unit’s upside was contained by the 50-day moving average most of the European morning. Still, after falling to the 1.1240 area, the buying interest emerged again, and most traders took profit to position themselves long EUR/USD.

At the end of the day, the EUR/USD closed the session 0.40% positive, but the critical victory happened way before in the morning when the asset set the 1.1240 as the floor for its next uptrend leg.

Currently, EUR/USD is testing the 1.1350; the short term bias remains bullish as long as the EUR/USD keeps itself above the 1.1240. Thought, the unit is losing momentum, but MACD is pointing to the upside. Resistances are now at 1.1360 and 1.1380.

5 to 10 years of weakness for the US Dollar? 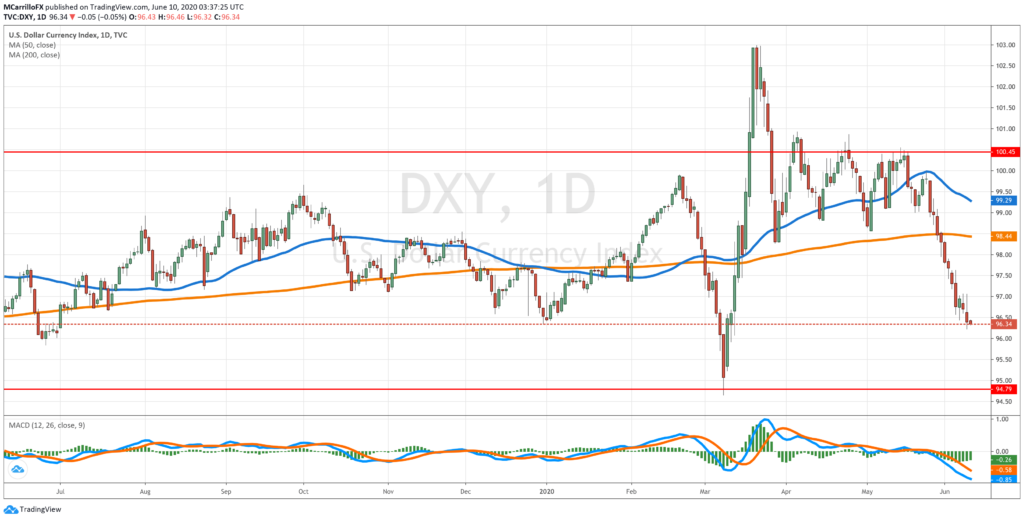 Last week, Financial Times quoted Wall Street analysts saying that the US dollar was heading for a period of 5 to 10 years of weakness. What the heck?

According to strategists at banks, including Goldman Sachs, Deutsche Bank, and JPMorgan, the Greenback will not be that greener in the next decade.

First, as a matter of context, the US dollar index is currently trading negatively for the eleventh day out of twelve, and it is now being exchanged below the 96.50 area at levels not seen for around three months.

Last week, Wall Street strategists called for the end of the dollar 2-year long rally. The reasons? Fed’s stimulus measures and money printing actions are fueling the world with new brand dollars. Besides, China is apparently more successful in its reopening plans, and the new PEPP plan in the eurozone is feeding the euro by easing fiscal concerns across Europe.

Zach Pandl, a strategist at Goldman, acknowledged that the bank now thinks that “it is appropriate for investors to position for dollar downside in their portfolios.”

In the same line, Citigroup strategist Calvin Tse said that the dollar could be at the beginning of a long path of weakness.

“If the global economy really is bottoming out and rebounding again, and US interest rates are at zero and potential growth is lower than emerging markets, we could see the dollar enter into a bear market that could last for five to 10 years,” Tse affirmed.