Euro reacts positively after upbeat ISM and before US Employment data 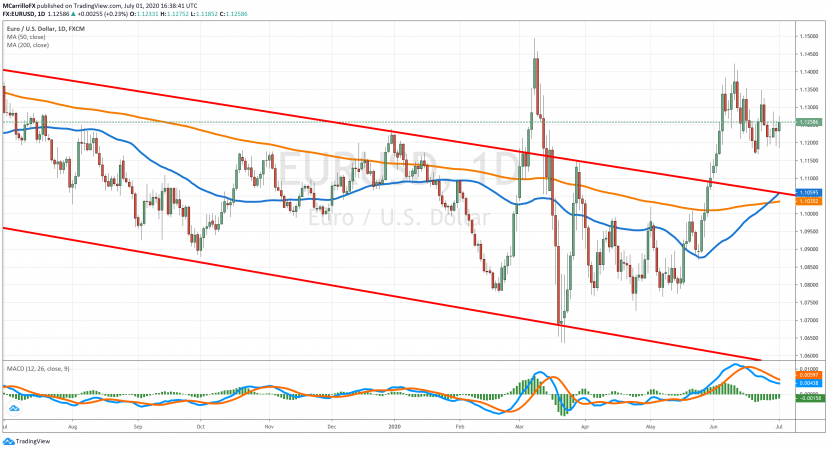 The euro recovered from its initial losses, and after testing the 1.1200 level, it managed to bounce back to favorable positions following a series of positive data in the United States economic front.

All eyes are now focused on the US employment report and its infamous nonfarm payrolls number published on Thursday.

Overall, economic data in Europe and the United States has been good on Wednesday. First, Germany released better than expected retail sales and unemployment rates for May. Then, the United States saw how ADP employment was revised wildly in May and was shy below expectations in June.

The Automatic Data Processing Inc, better known as the ADP, reported a creation of 2.36 million private jobs in the United States in June, below the 3 million jobs expected by the market.

However, May’s data was revised from a destruction of 2.76 million jobs to a 3.06 million creation in that month. Is it wild? Yes. But the ADP didn’t give any clarification for the revision.

For many experts, it is a sign that something good is happening in the economy, and a recovery was undergoing in June.

Finally, the ISM manufacturing PMI reported expansion in June at 52.6, while the market was expecting contraction at 49.5. A massive push for the confidence in an economic recovery.

“The ISM report crushed expectations, but you should still temper yours when it comes to the manufacturing outlook,” Analyst at Wells Fargo said in a recent note. “Orders surged from a low base and while factories aren’t firing people, they’re not yet hiring either.”

The US Bureau of Labor Statistics will release the June employment report for the American union. It won’t be published the first Friday of the month as it is typically released because the day after tomorrow is a bank holiday due to a fourth of July observance.

US Markets will be closed on Friday, by the way.

According to market expectations, the United States would have created 3 million jobs in June, which is an acceleration from the 2.5 million job production of May.

Euro on the positive note ahead of US employment report 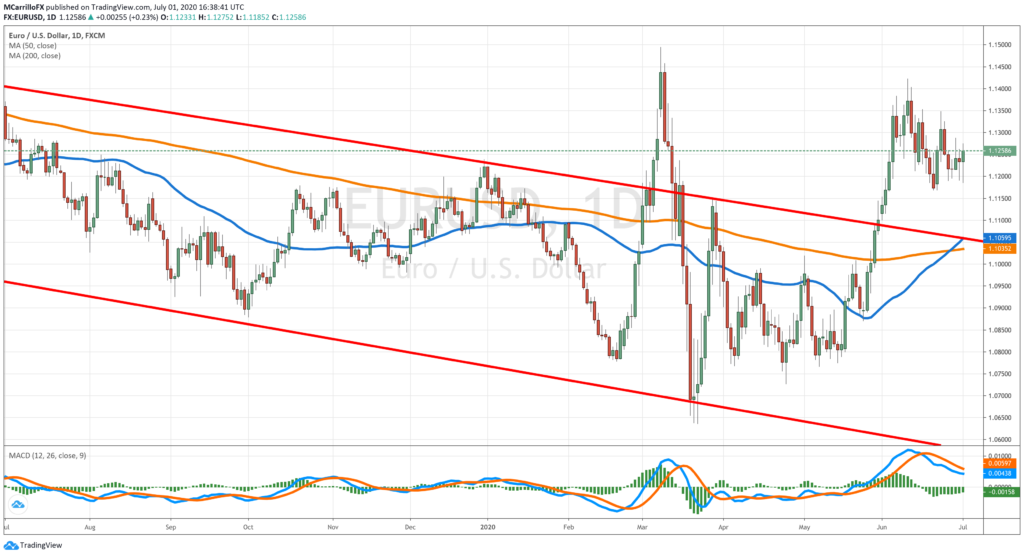 As mentioned above, the euro is trading positive against the dollar, mainly pushed by risk appetite mode after economic data in the United States. Now, the fate of the dollar and the euro depends on what the US Department of Labor will release.

As for now, the EUR/USD is trading at 1.1255, which is 0.20% positive on the day. Technically, the middle term picture looks bearish for the pair; however, the unit seems to be supported by the 1.1200 level and obviously by a weak dollar.

Following the ADP surprise, experts are waiting for a better than expected nonfarm payrolls numbers; however, the data is uncertain as jobless claims continue to loom, and the ISM employment component was not that good as the overall index.

Any good above-expectation-number in the NFP will fuel risk appetite, pushing the dollar down and then powering the euro to the 1.1300 and 1.1350 areas. However, an in line or a weaker than expected number will add pressure to markets, adding to risk aversion.

In addition, remember that Thursday will be the last day of the trading day in the United States and some profit taking can occur.