Both gold and silver have staged impressive rallies over the last months. While gold is trading at record highs already above $2,000, Silver is only halfway to its all-time high of $49.80. While both metals have strong fundamentals, it seems that silver has much more room to rise. “Those seeking both safety and a decent yield, only have one real option at the moment — with Treasury yields rooted near zero, and negative in real terms, and cash earning nothing. The ‘TINA’ theory — there is no alternative — is the final factor propelling the precious metal skyward,” said Michael Brown, senior market analyst at Caxton.

The bottom line is that with yields in record low levels – real yields even turning negative – the opportunity cost for the non-yielding metals decreases, making them more attractive investments.

What are the main risks for the current rally? 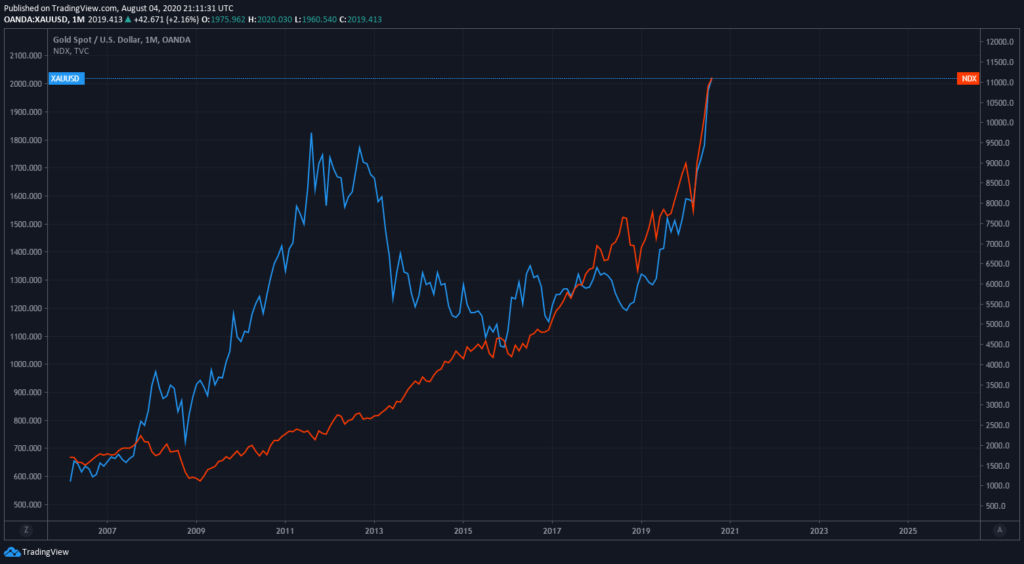 It is worth repeating that gold and silver have not been working as a safe-haven asset. This correlation usually works when US yields drop. Treasuries tend to move higher at times of fear, so it creates an impulse to gold prices. The US dollar is another asset that usually appreciates during times of negative market shocks. The effect of a stronger dollar could offset the yield effect, leading to a decline in XAU/USD in a risk-off environment.

The chart comparing XAU/USD and Nasdaq shows a positive correlation with no recent precedent. So the rally could be fueled by higher equity prices. A collapse in Wall Street could be a major risk for gold. Still, the decline in the metal could be less intense taking into account that market participants will await then more monetary stimulus, more negative real rates, capping the slide in gold.

Another risk is the current overbought conditions and projections. When all forecasts are basically in a unanimous way revised higher, surprises tend to occur. Analysts at TD Securities argued gold could be near a top, considering practically all indicators point to long.

“While not a timing indicator, this has historically coincided with market tops as it has been followed with periods of consolidation. This coincides with our interpretation of an ‘overshoot’, as excessively positive sentiment, frenzied speculation, and signs that consensus themes are driving trading decisions have all conspired to send gold prices far beyond its observed drivers over the past months.”