Kodak: A wild ride, with no end in sight

Eastman Kodak Co. (KODK) investors have faced extreme market conditions over the last weeks. On Monday, Kodak shares slumped and lost more than 25% after news that a $765 million loan from the US government was put on hold. The stock was temporarily halted after the price fell as much as 43%.

The US International Development Finance Corporation (DFC) had announced a loan so Kodak could produce generic active drug ingredients at their factories. However, on Friday, the planned loan was put on ice.

“Recent allegations of wrongdoing raise serious concerns. We will not proceed any further unless these allegations are cleared,” the US International Development Finance Corporation said in a tweet on Friday.

A controversy had arisen around KODK as a stock spike on July 27, before the loan decision was officially disclosed, led to allegations of insider trading against the company.

Trading volume rose more than 2,500% in the days that followed the loan announcement. The price also soared, going from $2.13 on July 27 (before the official announcement) to a high of $60, ending up 203% on July 28 and 318% higher on July 29. Actually, the New York Stock Exchange had to halt trading in the shares 20 times on that day, due to market volatility (in this case to the upside).

The Wall Street Journal reported last week that the Securities and Exchange Commission (SEC) was investigating the circumstances around the loan announcement as Kodak disclosed details one day before the official statement, which led to a 25% price surge on July 27. That same day, Kodak top executives, including CEO Jim Continenza, received stock options.

The Trump administration has not ruled out the loan for good, but White House Press Secretary Kayleigh McEnany said on Monday they are taking the allegations very seriously and will not proceed until they are cleared.

Having closed Monday at $ 10.73, KODK is still up 130% year to date. The immediate future for Kodak remains uncertain. Volatility could ease from stratospheric levels but likely hold at extreme as the SEC investigation progresses.

Will it go back to where it was?

The Kodak chart shows how the price jumped late in July, compared to where it traded months before. Such moves are not typical. The question now is: will it drop all the way back, under $5, or will it keep some of its recent gains? The July peak seems unreachable, but it was also unthinkable weeks ago that the share could rise to $10! (not even considering above $20). Trading Kodak these days requires extra attention and extreme precaution. 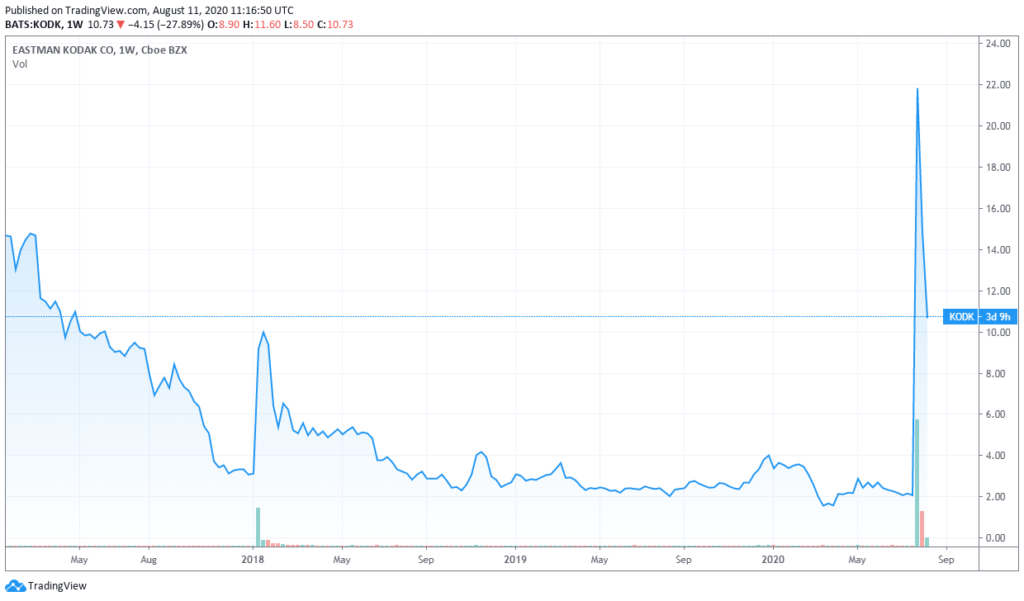