Wall Street ended last week higher, extending the rally amid stimulus speculation. The Q3 earning season is starting and could boost markets or favor a correction. Top U.S. financial institutions are due this week.

Bank stocks have not been performing well. They have not been able to recover from the COVID-19 slump. So far in 2020, the banking sector (measured by KBW Nasdaq Bank Index) is down 28% while the S&P 500 gains 7.9%. The KBW rose to the highest level since June, probably anticipating good quarter results. 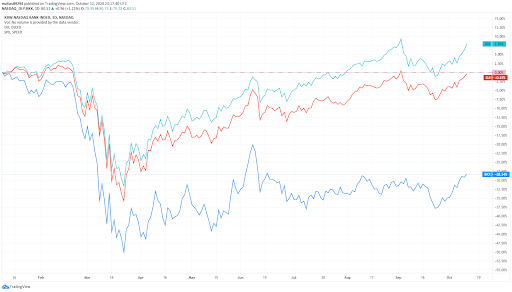 On Tuesday, as U.S. markets return to normal after banks and the bond markets were closed on Monday for the Columbus Day holiday. J.P. Morgan Chase and Citigroup will begin a set of corporate results for the third quarter. It is not expected to have been a good quarter for banks, but not as bad as the worst of the coronavirus pandemic.

The U.S. economy is expected to see record growth in Q3 after the record collapse in Q2. But it is not a complete V, and the economy is decelerating. The outlook looks not so bright. That is why in his latest public appearances, Fed’s Chair Jerome Powell pushed for more stimulus, warning of an economic “downward spiral.”

On average, market analysts expect higher profits in banks in the third quarter and a rebound in per-share earnings compared to the second quarter. “When the pandemic hit, and the economy mostly shut down, banks set aside tens of billions of dollars to cover soured loans, took in record deposits and contended with a Wall Street trading bonanza. That topsy-turvy start to the year is now giving way to a steadier new normal”, explained Ben Eisen from the WSJ.

On Tuesday, before the opening, J.P. Morgan Chase will present its results with analysts expecting $2.23 earnings-per-share (EPS), on approximately $28 billion in revenue. “JPM usually sets the tone for bank earnings, and its earnings call featuring CEO Jamie Dimon is often a big draw. That’s all on deck for early Tuesday,” wrote J. Kinahan, Chief Market Strategist at TD Ameritrade.

Vince Martin from InvestorsPlace argues that earnings news won’t necessarily move financial stocks themselves. “JPM stock has a long history of fading, even after seemingly spectacular earnings reports in the past. Wells Fargo has structural issues with which to contend. Other stocks in the sector are dealing with the pressure of far lower long-term interest rate expectations. However, bank earnings reports certainly can move the market. At the least, they need to be strong enough to keep investor attention focused on continued macro recovery. If the sector shows potential cracks in the current economy, however, that puts a huge roadblock in the market’s path back to new highs.”

Banks have been aggressively allocating funds for loan losses related to the pandemic, so it is possible, according to Kinahan, “that much of the bad news is baked into the earnings cake, which could leave room for upside surprises.”

It not all about earnings

Beyond earning, events that could have a considerable influence on markets include U.S. politics, stimulus talks, Brexit and economic data.
It’s three weeks until the U.S. presidential elections. Democratic candidate Joe Biden appears to be leading the polls. The focus will likely continue to be on the pools, the campaign and particularly about discussions for another fiscal package.

Brexit headlines could also have an impact on markets ahead of the European Union summit. Optimism still prevails that a deal will be reached between the UK and EU, but there is still work to do. “The UK has said the summit marks a deadline for agreeing on a trade deal and that it will withdraw from negotiations and prepare for a hard Brexit if there is none. We think the end of the transmission period on 31 December is still way too far ahead for a deal to be struck already and we expect negotiations to continue, also after this week”, explained analysts at Danske Bank.

Among key economic reports are US inflation and retail sales. Lately, economic reports have not moved markets, as investors remain more centered about the future. Politics and earnings could be the music for markets this week.