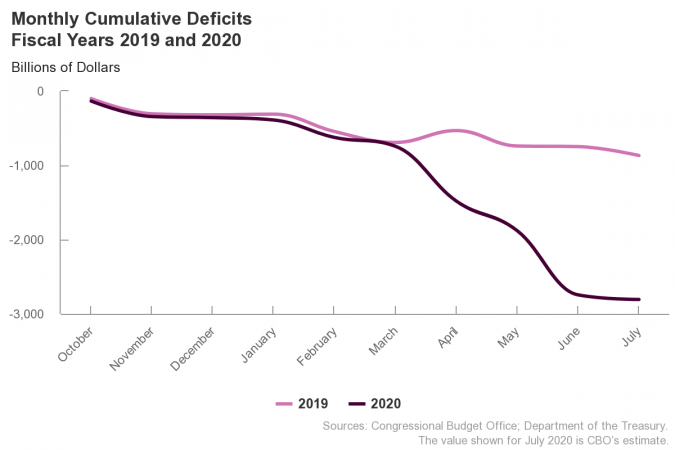 The US federal budget deficit for the first ten months of the fiscal year 2020 reached $2.8 trillion, $1.9 trillion more than the shortfall recorded during the same period last year. The Congressional Budget Office (CBO) projects a deficit of at least $3.7 trillion for 2020, which is 17.9% of the projected GDP. The situation could get worse if Congress approves additional spendings or tax cuts to curb the pandemic effects.

By any measure, the 2020 deficit will be huge. The average deficit in terms of GDP over the last 50 years has been around 3%. During the Great Recession (fiscal year 2009), the deficit was just 9.8% of GDP. Of course, the COVID-19 pandemic has made things much worse, but even before that, the deficit was running at high levels, mainly due to the 2017 tax cut.

The July monthly deficit was $61 billion, the smallest deficit since January. It was the result of a record in revenues (563,496 million) “due to the deferral of certain individual and business taxes from April – June into July. July has been a deficit month 64 times out of the past 66 fiscal years (since FY 1955), because there are typically no major corporate or individual tax due dates in this month”, according to a statement released by the Department of Treasury.

By this time, in 2019, the deficit was 866 billion, now it totals 2,8 trillion. “Due to increased spending authorized for COVID-19 relief, Outlays are up $1.849 trillion (50%) fiscal-year-to-date after adjusting for the acceleration of benefit payments into July”, the Treasury said.

The highest deficit was in June when it reached $863 billion. For every hundred dollars of spending, $20 were financed by taxes and $80 with debt. The deficit of June was almost as large as the 2019 entire deficit ($984 billion or 4.6% of GDP).

The US and other developed economies have the possibility of running large deficits for long periods. This comes in handy at times of lockdowns and pandemics. Developing economies do not have the same opportunity as their capacity to increase their national debts is much more limited.

As analysts at Wells Fargo explains, countries with the fiscal capacity, capital markets access and political will to float their economies through the COVID-19 would have a major leg up heading into the recovery, while “others without these ingredients may struggle mightily when dealing with the economic fallout from COVID-19.” The US is using its fiscal firepower to boost the economy because so far, the size of its fiscal deficit does not matter.