Walmart+ will be launched this month to begin the competitive race with Amazon Prime. The subscription will cost $98 a year and it will give access to delivery services such as groceries and other goods.

Walmart is 15 years behind Amazon Prime’s launch, but they have been preparing for quite some time. The membership will allow same day deliveries and access to secure grocery delivery slots, which have been an issue during the high demand during these months of Covid pandemic.

Also, Walmart+ will notify clients when there is an opening in the virtual line to place your order, known as an open slot notification. In the future they will offer a Walmart+ credit card with additional benefits.

Other advantages for members include Walmart gas station discounts, early access to newly launched products or deals, and even a Scan & Go service. This last benefit was previously tested and brought to a stop around two years ago. It allowed you to scan your products, pay using your phone, and check out without standing in line.

Yes, it seems Walmart finally got serious against Amazon.

During the pandemic, Walmart increased customer loyalty and they are now valued at $337 billion. Amazon Prime on the other hand is worth $1.5 trillion, and has over 150 million members around the world.

Amazon Prime asks for a $199 annual payment, and during the months of March and April, they received complaints for their extended delivery times. It is expected that Walmart+ will not buckle under this pressure since they are physically present, and already have a smart distribution plan.

Prime members also get discounts on Whole Foods stores, and it is a fact that they spend regularly on Amazon. Amazon Prime extended their services to video entertainment such as series, TV shows, and movies.

The trillion dollar company has upped its game by creating exclusive Amazon Prime video content, attracting new clients during the pandemic. As for Walmart, they have not yet confirmed that video and entertainment services will be included, but it has been discussed and could be added in the future.

It is unknown if Walmart+ will launch only within the United States or on a regional level, but its launch will positively affect e-commerce sales, causing reactions from analysts. 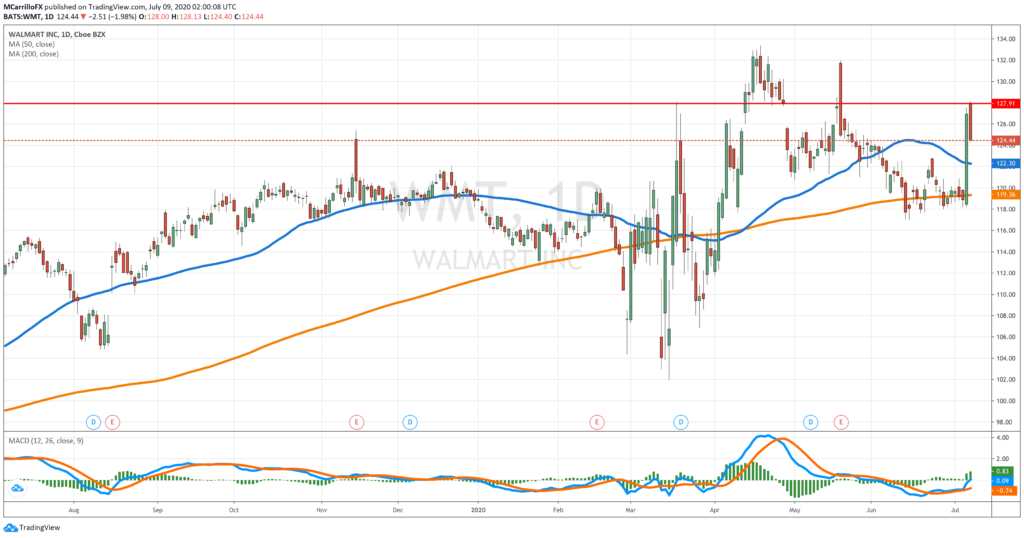 Technically, the 128.00 is a strong resistance that performed as support back in April, when WMT rose to its all-time high at 133.38 on April 20.

Former Toys R Us CEO Gerald Storch said on Fox Business that the “battle of the century” in the new normality of the retail sector characterizes “Godzilla versus King Kong.”

Storch declared that euphemism as it looks that this time Walmart has made the right move, and markets are buying it.

CFRA analysts have Walmart as a “strong buy” share with a 12-month target price of $145.00 amid ” its e-commerce growth potential, and the stock’s steep discount relative to Amazon.”